We are proud to introduce the ultimate zero-waste scrub brush! Made using a high-quality aluminum handle that instantly makes the build quality apparent when you hold it, this brush uses replaceable scrub heads that are 100% biodegradable. It is completely plastic-free and the handle has a 10-year warranty!

The bristles are made of sisal fibers that are stiff and the perfect texture to remove food, grease, or just general cleaning without scratching. The head that holds the sisal bristles is made from eco-friendly bamboo that has threads that screw into the aluminum handle, making it easy to replace when needed.

The jute string attached to the end of the handle makes it easy to hang to dry when not in use, extending the life of each brush head.

This superior scrub brush is impressive to hold and probably the most durable and Earth-Friendly scrub brush available today!

Each Scrub Brush Comes With One handle and One Brush Head

We love the aluminum handle on this brush. It feels much more sturdy than our previous wooden handle, and the twist-on brush is much more secure as well. If you've tried the wooden handle brushes and found yourself not as impressed as you wanted to be as it loosens over time; this is for you.

Such a great way to scrub dishes. Durable and very functional.

S
Susan A.
It’s better than I expected!

I don’t like buying sustainable products usually because they advertise as having replaceable parts but you typically have to replace the whole product because something important broke or something. Now I’m wishing I could find other products with this concept like mops, brooms, toilet scrubbers and other scrub brushes.

This is a 10/10 for me! It’s totally sustainable, super effective, comfortable to use, and easy on the eyes.

I take pleasure in things which show evidence of a clear understanding of the relationship between form and function, and this brush is a fine example of such a thing. It feels great in the hand -- its solidity confirms that it's not a throw-away item; it looks good because of its simple lines, which don't pretend to be anything other than what it is; and it works well, because the brush is stiff and well-formed -- and can be replaced. It arrived packaged in a handsome box, as you can see in the photo taken in the brush's natural habitat. If you need a good brush for dishes and chores around the sink, I know of none better than this. I was also startled to receive a hand-written note from the makers, which was both charming and a bracing reminder that small companies comprise actual human beings, a fact which our normal modes of production and consumption generally conceal. 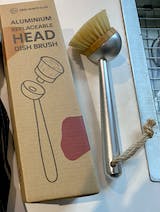 This is a great dish brush. Super high quality. So delighted to have a non plastic solution to dish brushing!

5 star
4 star
3 star
2 star
1 star
The wood handles always come loose and the replacement heads fall out. Looking forward to trying this
Trying to eliminate the need to use single-use plastic with cleaning/personal care/everything, such as cleaning brushes!
I'm trying to eliminate plastic and non-degradable products from my home
no plastic, durable, replaceable brush head.